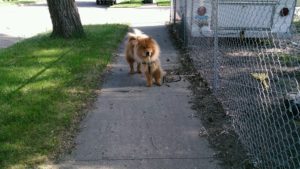 The cable is my friend.

Not sure **he** agrees with that assessment!

Before I can even think about getting a new puppy, he is carefully checking out all the escape routes so I can re-seal them. Thirteen years ago, this yard was well sealed against a tiny puppy, but wind and rain have moved the soil in places. Personally, I suspect there was some “paw power” involved in moving the dirt here as well…

This is this point where I ought to have my weekly update ready to go, but as it is not ready, there will be a tasty tidbit of silly stuff to fill in here instead.

I am trying to figure out how to add a photo… 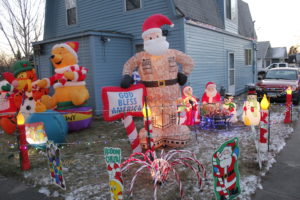 Minot currently has a city council, made up of two representatives from each of the seven wards. The original intent of the Make Minot proposal, as **I** was given to understand it, was to “bring more people and interest into the Minot city government.”

Yes, I agree that more voices need to be heard, but I think their plan is totally backwards. Instead of bringing in new voices, cutting the size of the city council guarantees that they are limiting new voices from having any say in how the city is run.

Instead of limiting the size of the city council, we need to expand it. The original seven wards need to be redrawn into fifteen new wards, because the city of Minot has grown and spread out. If they do not want to increase the size of the council, they can elect only one representative from each new ward. In order to get some “new blood” into city government, electing two from each new ward would be a better choice, but then the city council would lose the ability to look down on the plebian crowd from the raised dais in that fancy council chamber.

Arguments that we need a smaller city council “because Fargo has a smaller one” are ludicrous. There is no reason why Minot needs to do anything to “be like Fargo.” Yes, this is a common argument in almost every topic of daily life in Minot, but it makes no sense whatsoever. If one feels “Fargo is better” for whatever reason, then one should really consider moving to Fargo. This is Minot. We need to involve the people of Minot in making the decisions of our city government, not look to Fargo for their answers.

I am trying out a new plan, so bear with me as I figure it out!

Welcome to my world – pour yourself a cup of coffee and sit a spell.