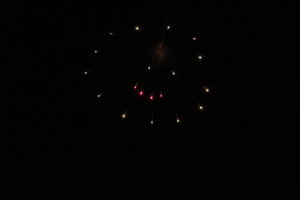 It was my mom’s birthday on February 19th, and she turned 85 years old.

We sent up smiling rockets for her!

Not a warm day, but the sky was clear — it was 33F  when we went out and did the finale for mom’s birthday party.

I had saved the smiling face rockets from the 4th of July for mom’s birthday, because she loves smiley faces.
There are many confused neighbors shaking their heads at us, but we all found it to be the perfect way to celebrate!

For this year, it was my job/role/position to line up the “program speakers” for the Minot Camera Club. We have a short business meeting and then an educational program or presentation of some kind on the first Monday of every month.

The club is evenly split between the people who not only take photography and competition seriously but also gave lessons to Mathew B. Brady, Eastman and Kodak and the other half of us who are still learning to operate our first DSLR (digital single lens reflex camera.)

I especially like the hands-on projects where we actually use our cameras and do *stuff* at the meeting. I was able to line up one hands-on presentation on making use of the available light for people pictures and portraits this fall…and it rained. We did not have the same results inside the building that she had planned for using outside. Weather is never guaranteed, so that stuff happens.

I lined up two presentations where they showed us pictures and explained how they got them and what kind of different ideas we can try next time.

I wanted a presentation on lenses. I have read all sorts of reviews on different lenses. I have looked at several. I have clicked “add to cart” more than twice…but never pulled the trigger.

One person (from the experienced side of the club) who I spoke to thinks it is a silly idea for a program, but he already has more lenses than he would ever be able to carry to a single event. He scoffed at the idea of us poor beginners ever buying a serious lens. As I actually know people who put a Sub-Zero refrigerator and a Viking range in their kitchen and only use them to heat up pre-packed Lean Cuisine frozen dinners, the argument that we beginners would refuse to spend a chunk of change on a good lens does not hold water.

We do, however, need some education to know what we are buying!

I wanted a knowledgeable retailer to come in with a selection of lenses to present and explain. This is what we carry, this is what we can order, these are really a great deal for the price, these are extremely expensive but worth every penny, these are overpriced and over-rated….

The first choice for me was the place where I bought my camera, but he was not available for the dates I needed to fill.

So I started looking around for retailers that sold both Canon and Nikon camera lenses. The best local selection seemed to be at Best Buy, so I talked to the assistant manager there. He seemed agreeable, but said he needed permission from “corporate” because the guy would have to be “on the clock” or he could not ask him to do it.

OK, that makes sense. For him to remove the lenses from the store, he would need to be on duty.

Yesterday, I went over to check back in with the assistant manager I had spoke to and make sure it was approved. He said sure, no problem. Then he added a bombshell – since that would be considered a branded Best Buy Service Call, there would be a “small” service charge of $100.00.

I am not going to pay you to make a sales pitch of your products to a captive audience. Aside from the fact that the camera club does not and cannot pay for speakers, I personally refuse to pay for advertising.

Marketing strategy for the win!

Over the past two months, my social media newsfeed has been filled with pop up sales and testimonials for LuLaRoe clothing. Glowing testimonials abound!

However, I find their listed sizing confusing. I have seen some items that are tempting, but I have never purchased any.

Six months ago, I had honestly never heard of the company. Suddenly, I am seeing it everywhere I look, which fits my definition of marketing genius. It appears to be sold on the party plan, like Tupperware and so many others. **

Sales is not my strong point, but I do love Tupperware.

So I clicked the links on “you can make a kazilllion dollars selling LLR with no work” and “selling LuLaRoe for fun and profit!”…etc.

Not quite the hundred dollar investment I expected to pay for my basic initial starter kit. I was thinking maybe five hundred dollars, but my decimal point was misplaced.

Then the “anti” videos started popping into the stream. Not everyone has glowing reports on their experience selling LLR, it seems. The drawbacks I saw on these videos about being part of the sales force were enough to convince me not to buy a starter kit. Plus, there is that whole “**disclaimer – I tried selling Tupperware.

Sales is not my strong point, but I do love Tupperware.” thing.

So now I am on the prowl to find these products in “real life.” I had good luck the last time I bought a product “sight unseen” under similar circumstances – and I did also flirt with the idea of selling Jamberry products. However, that flirtation came after using and loving the product. Which totally proves the marketing genius of LuLaRoe, at least to me.

Looking over some of the past topics, and this one still rings true for me.

With a new grandbaby on the way, I was thinking of all that advice everybody loves to give new mommies.
The best piece of advice I ever got actually came when I was not actually a “new” parent any longer – and it came from a highly-unlikely source, but it is still the best advice I have ever heard for parents of all ages.
When your kids need a ride, for a school trip, to a dance, to a movie, to the mall, to the next county, even! – do not bother keeping score to say “I drove last time, it is Suzy’s mom’s turn to drive this time.” Just say “yes, I can drive.”
If you drive, you know where the kids are, who they are with, and what they are doing. Plus, you hear the blow-by-blow discussion between the kids in the back seat on the trip home – inside information you will not get when they arrive home and you ask “how was the dance?”

The worst piece of advice I got came from a highly trusted source, and I am ashamed to say I followed it for far too many years:  “do not let your kids hear you praise them, because it will give them a swelled head. If you are out with child A, praise child B.”
I did that for years.
It was wrong.
I am truly sorry I followed that piece of advice.

Praise your kids to other people – and let them hear you.
Trust me.
It is good advice.